The first race on Saturday was in glorious sunshine and everything was looking good for the 1:30 pm start. With our 6th place qualifying we were far enough forward on the grid to be in contention.

Bruce rode first and got away well but  soon dropped back with the bike slowing up. He came in as soon as the pit opened and Dean soon found the same problem, but worse.

The gears were not changing properly with top gear not engaging at all because the left hand gear linkage started to break!

Dean did a great job of getting the bike home by eventually changing gear by hand and kicking the remote linkage with his foot.

It you don’t finish the race it makes the next day a waste of time, with the combined times.

The problems were a binding front brake, on both sides. The water from the practice sessions was enough to get into the brake pivots and stop the brake returning.

The gearbox problem was strange as we checked it out in the pits and it changed gears perfectly. We fitted the spare right hand (standard Manx) gear linkage and (wrongly) assumed the problem was the failing linkage. The gearbox oil was changed and looked OK.

We worked on the bike until late and Dean and Charlotte stipped the brake and lubed the pivots, while James Bloore and I swapped over the gear change and brake levers.

We were reasonably confident the problems were fixed and on Sunday we would be on the pace.

The weather held up until after our race before lunch. Dean got a really good start, and was up to 4th and happy. But once he got on the fast sections the gearbox would not change gear. Dean said the pedal would jam and it was too dangerous to continue, so he returned to the pits.

When we checked it on the stand it had all six gears so the problem is only occurring at high speed. I will try and strip the gearbox before I go back to NZ.

It is frustrating that it did not show up in NZ when Cameron Donald rode the bike at the Pukekohe Festival, and Bruce Anstey didn’t get a chance to show his true form. 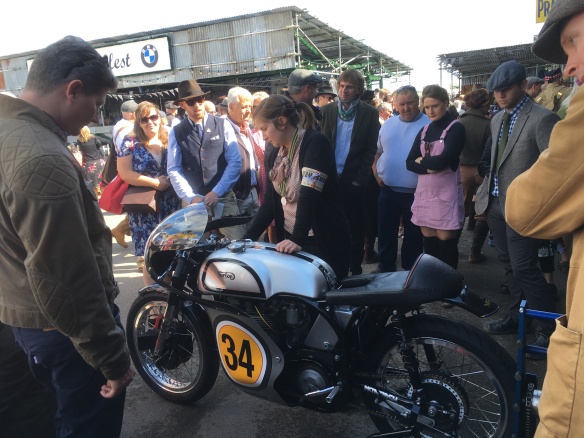 He made comment it took two attempts to get a result at the Isle of Man, so maybe we will see him again next year.

I felt really sorry for our team as we all tried really hard to get a result and after all the rain and the sea of mud in the car parks it was a bit of an ordeal.

It started to rain on the far side of the circuit early in the Sunday race, which caught out Glen English who slid off Fred Walmsley’s G50.

The 3 cylinder MV of Michael and William Dunlop expired  in a cloud of smoke during the first race , and both Fred Walmsley’s G50 Matchless’s had falls, so we were not alone in our disappointments.

Gary Johnson and Mick Grant had a good ride, being elevated to 3rd after the Dunlop’s, riding a borrowed Manx Norton, copped a 10 second penalty for changing riders outside the “pit window”.

Some of the Goodwood “characters”

Charlotte and Debbie adding some colour to the holding area. 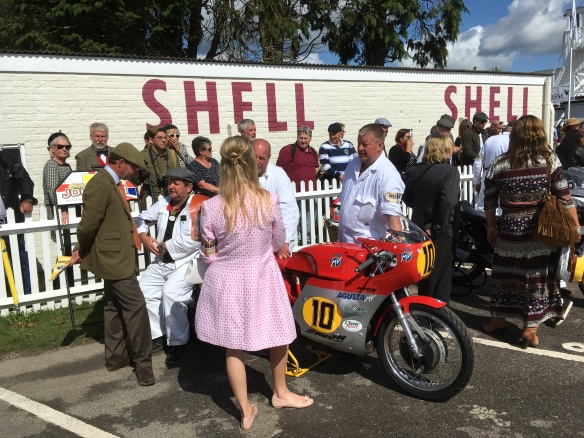 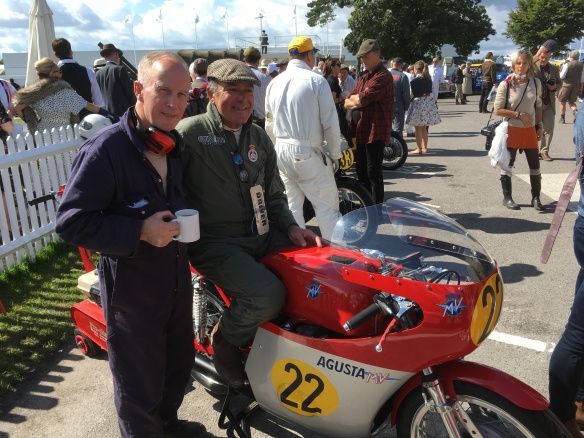 Our Isle of Man helper Ian Wardrope from Scotland, with owner Señor Fulch

Dick Linton in a happy mood. He just has an upside-down smile.

Jan and Peter McMillan, who do such a great job of organising  the Eastern Creek Barry Sheene meeting, and Goodwood regular Alan Cathcart